On the first crisp day of fall, Melanie Falcon went for a run in Allentown, Pennsylvania.

She returned home feeling more worn out than usual. In the days that followed, Falcon – a TV news anchor and reporter who was then 26 – endured fever, chills, headaches and fatigue.

She thought it was a bad cold or the flu. When the symptoms persisted for several days, she went to a doctor. They determined it wasn't a cold or the flu, and tested her for Lyme disease, which came back negative. After several more weeks of symptoms, she went to an infectious disease specialist. Additional testing failed to provide answers.

Meanwhile, Falcon continued to feel miserable. That was 2012, and as she worked around the clock reporting on Hurricane Sandy, "I set alarms on my phone to alternate between Advil and Tylenol because my fever and chills were so bad," she said.

By late November, Falcon became so weak and fatigued, she was admitted to the hospital. Yet again, the only thing they found was the possibility of a virus, and she was sent home. Days later, she felt worse and returned to the hospital.

This time, an echocardiogram revealed Falcon had a common congenital heart defect called a bicuspid aortic valve. Instead of having three leaflets, two of hers were fused together, preventing the valve from closing normally. Additionally, her valve had become infected, damaging it and the tissue surrounding it.

Falcon was handed an "open-heart surgery handbook" and tried to prepare for surgery scheduled less than 12 hours later.

"At that point, I wasn't even scared," she said. "I was so sick and felt terrible that I just knew I wasn't going to live if I didn't have that surgery."

Falcon also had to decide what kind of replacement valve she wanted: mechanical or bovine.

She opted for a bovine valve because it would allow her the possibility of having children later, even though it would mean eventually needing another valve replacement.

The next morning, doctors removed the infected tissue from her heart, patched the area around the root of her aorta and replaced the diseased valve.

After cardiac rehab, Falcon returned to running and felt great. She shared her story during her local newscast to raise awareness as she navigated the new world of congenital heart defects.

She also married Brian O'Reilly. And three years after her surgery, she had their first son.

Three years later, she became pregnant with another son. At that time, she also had signs her heart valve was wearing out. She was closely monitored and safely delivered their son, Charlie, in November 2018.

Shortly after that, it was time to think about the next operation. This time, she and O'Reilly had time to prepare. As they consulted with doctors and underwent preliminary testing, they were reminded of something discovered during her first surgery: She had another congenital heart defect.

Simply put, Falcon's coronary artery didn't go where it was supposed to. It's called anomalous coronary artery. It hadn't caused any problems, but it did increase her risk for future cardiac events.

O'Reilly said his wife stayed focused on "taking care of business and that sense of 'I need to be OK for my sons.' I was the one who was freaking out the whole time," he said.

Falcon underwent her second open-heart surgery in November 2019. This time she had two surgeons – one to do the valve replacement and another specializing in congenital heart defects to fix the anomalous coronary artery.

Falcon was back to running 10 weeks after the surgery, a recovery her doctors credited to her pre-surgery fitness level.

Bicuspid aortic valves are often genetic. Since Falcon's diagnosis, screening has detected the condition in her father and 3-year-old son, Charlie; for now, they only need monitoring. Falcon will eventually need a third valve replacement, though she's hopeful it can be done through a less invasive procedure.

Today, Falcon shares her story at American Heart Association events to raise awareness about congenital heart defects. She's passing along the knowledge she wishes she'd had back when she was trying to figure out her flu-like symptoms.

"I didn't really know anything about congenital heart conditions," she said. "I knew about heart attacks, but that was pretty much it."

Falcon said her experience shows how important it is to advocate for yourself if something seems wrong, including returning to the hospital after being sent home.

"My first surgeon said I probably had hours to live if I hadn't had that operation when I did," she said. "That's scary to look back and think about. Listen to your body and don't be afraid to talk to your doctor. Have a good knowledge base about how your body usually feels and be an advocate for yourself if something seems off."

Even before Falcon had her first surgery, O'Reilly was no stranger to it. When he was in middle school, his father had two bypass surgeries. But this experience opened his eyes to a whole different community of heart patients who were born with their condition.

"Understanding that heart disease can be uncontrollable made me realize how important advocacy was and going to the doctor and understanding your body and how it works," he said. "Heart disease is not just the old guy clutching his chest. It can be everybody and everything." More than a decade of intermittent symptoms, then heart failure 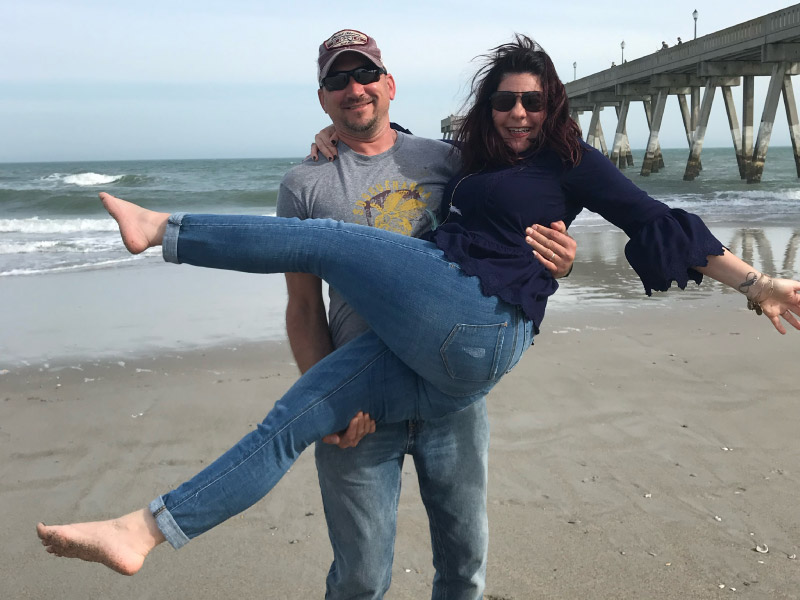 Fit and 41, she thought nothing of her family history – until her heart attack